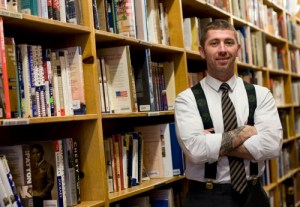 Primarily focusing on criminal defense (though he prefers the term “citizen defense”,) Jefferson Griffeath handles felonies, misdemeanors, as well as divorce and custody issues in family law.   Jefferson champions Idahoans when they feel they’ve been mistreated by the government, whether in criminal defense, property issues, unfair regulation, or contract disputes. As a former Marine Infantry Sergeant, Jefferson Griffeath takes his oath to support and defend the Constitution very seriously.

Jefferson Griffeath is a single father and understands divorce and custody personally.  He has worked both behind a desk and behind a shovel and understands the day to day life of the Idaho working man. A consummate professional, Jefferson takes each client’s case personally. Since beginning his practice, Jefferson Griffeath has handled both felony and misdemeanor criminal cases, divorce and custody battles, property disputes against the state, and has helped address constitutional challenges against the State before the Idaho Supreme Court.