Women in the Infantry (almost)

It appears that 4 female Marines are going to pass infantry school.  I’ve spoken at length about women in the infantry before so I’m not going to rehash it here.  I would like to make a few points though.  First off, I’d like to congratulate these women.  When I graduated boot camp I did not feel it was terribly difficult physically.  Mentally on the other hand…

Perhaps the biggest surprise for me was the fact that boot camp did NOT even come close to preparing me for infantry school.  The humps and range runs were very difficult for me.  So congratulations to these women. They’ve done something to be very proud of.  It’s also worth noting that in general you cannot just drop out of infantry school.  You can be dropped, and if you’re persistent you can drop out of boot camp or infantry school, but you can’t just put up your hand and say, “I quit” like people going out for special forces can.  These women had the option to quit that the men didn’t.  That they pushed through is a testament to their character.

Secondly, I am somewhat concerned about watering down the standards.  I’m not sure when they chose to do so, but the final hump was 12.5 miles.  This is just a shade over the 10 miles the final hump in boot camp is.  I haven’t been out all that long (I graduated infantry school in 2000) and the final hump was 18 miles  (word is that it was closer to 21, but I’ll stick with the published number).  Were my tin foil hat improperly adjusted I’d say women joining the infantry and lowering of the most grueling task in infantry school are related.

Finally, and perhaps the part most entertaining to me, is the fact that these women will not actually be attached to an infantry unit.  They’re going back to their pogue units.  I would hate to be a male Marine in the same admin/supply/motor T/air wing/whatever section as a female Marine who passed infantry school.  Those men would have to go to work every day knowing that the most badass Marine in their section was a female.  Seriously, grunts think they’re invincible.  Grunts think they’re better than everyone else.  If you’re an admin Corporal or Sergeant and you want to chew this female Lance Corporal’s ass for any reason, and she’s passed infantry school, well, good luck with that.

In short, Marine Corps, toughen up your damn standards.  But all the same, congratulations ladies.  I’d be honored to meet one of you over a beer.  I’ve always wanted a wookie I could call my own, and it’d be amazing were she a grunt as well. 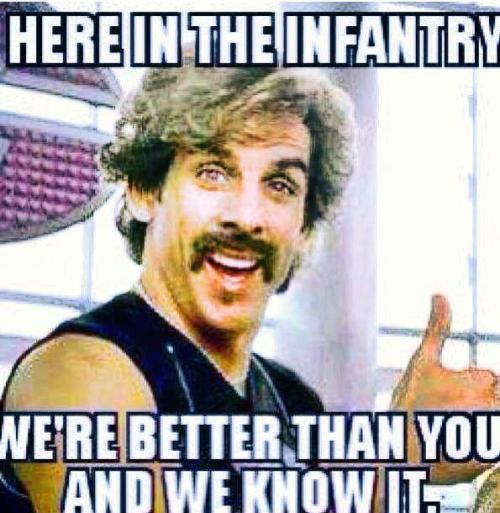 That about sums it up

No Speech for You!