A Place We Can Agree With ISIS

I hear many libertarians and progressives suggest that we need to stay out of the middle east because, “That’s what ISIS wants.”

Well, “That’s what they want.” is not a reason to withhold it from them.  Here in Idaho the age at which a person can choose which parent they want to live with is 18.  They don’t get to make that call as a kid.  But that isn’t to say that the judge doesn’t listen to what a 14 year old kid says when he’s on the stand.  The kid can get up there and say which parent he wants to live with, but the weight of that kid’s testimony is established with the question, “Why?”.
Many kids want to live with mom/dad because that parent doesn’t have a bed time/doesn’t make them go to school/lets them drink/ect.  Now if that’s the case, then the judge isn’t going to care what the kid says.  There has to be a good reason.  ISIS doesn’t have one.

They want to induce us to come to them.  Why?  Well, they believe that Dabiq (A city in Syria and the name of ISIS’s magazine) will be the place that will cause a battle that brings about the final caliphate and the glorious end of days.  So they’re going to poke at us until we come to them and help them bring about the apocalypse.

No?  Then why would you be concerned with ISIS bringing about the final caliphate or other such silliness?  Yeah, they want us to come to them.  So what?  They aren’t going to get what they want when we come.  What they will find is not glory, but death.  Basically they will poke and poke and poke at us.  They will commit barbarism against their women and children.  They will take heads and melt men in acid to shock the world.  They will prevent the advancement of their people and of our species until we come for our fellows.

Yet, what have we to fear from them?  They are not men.  They are cowards. 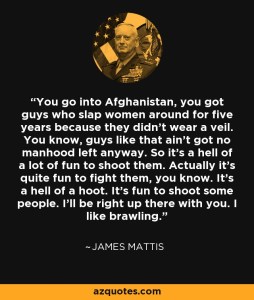 If the neighbor shows up once a week, knocks on my door and poopsacks me in the hopes that I’ll come to his house where his imaginary friends will help him beat me up and then shower him in riches and women, I’m going over to his house and kicking his ass.  Why?  Because I don’t believe in imaginary friends.

Look, there are some pretty good arguments out there about whether or not the U.S. military should intervene.  But, “we’re playing into ISIS’s game plan” just isn’t one of them.

What Then When it Gets Real?